The unemployment rate in Santa Clara County — the heart of Silicon Valley — is 3.8 percent. The rate is even lower in other tech-focused cities in the region, such as Cupertino, Palo Alto and Menlo Park.

The tech sector is driving those jobs, from Apple to Google to Facebook.

One of the biggest areas of growth continues to be within e-commerce. E-commerce jobs have existed in Silicon Valley since the dawn of the first dot-com era, way back in the late 1990s. Remember, if you will, Pets.com.

But the Silicon Valley e-commerce jobs aren’t stockers and shippers and blue-collar jobs — the office parks for e-commerce companies in Silicon Valley are filled with software engineers, web developers and marketers.

But as e-commerce, or online shopping, has grown, it has fueled another type of job: Jobs in warehouses and distribution centers, where the stuff we order gets sorted, packed and shipped.

Valley Farm Towns Are Being Transformed by Online Shopping

Warehouses Promise Jobs, But What Happens When the Robots Come?

One measure of this growth is in jobs labeled as “general warehousing” by the federal Bureau of Labor Statistics.

According to economist Michael Mandel with the Progressive Policy Institute, online shopping has the potential to bring employment to areas far beyond Silicon Valley, including areas like Riverside County, which are in need of jobs and growth.

“These are jobs that are fairly well paid. They are not entry-level retail jobs,” said Mandel. “They’ve got decent salaries and very often are full benefits. So this really makes a difference to the growth of a region like this, helping pull jobs out of the concentrated center cities, those really dense areas, to areas that really need it.”

Mandel said the growth in the number of warehouse-related jobs has more than offset the stagnation of jobs in the world of brick-and-mortar retail. Mandel acknowledged that the jobs are quite different, and in some cases more difficult.

However, there have been complaints and concerns that the jobs don’t, in fact, pay well enough. That’s especially true in the Central Valley town of Tracy, which is home to two large Amazon distribution centers among many others.

In San Joaquin County, where Tracy is located, warehouse jobs increased from 4,338 in 2007 to 11,691 in 2016, according to the Bureau of Labor Statistics. Meanwhile, housing costs in Tracy have skyrocketed, and warehouse wages haven’t been able to keep up.

As companies like Amazon push the boundaries of automation in their distribution centers, there is a fear that these jobs could be short-lived. A recent study from McKinseyranked different job sectors where machines are most likely to replace humans, and “Transportation and Warehousing” ranked near the top. That’s because jobs with lots of repetitive tasks, like those often done in warehouses, are most at risk from automation.

For now, however, there are some jobs that people do better than robots — things like picking delicate or oddly-shaped items from a shelf. In many cases, people and machines are working side by side. And it appears that ever-growing demand for online shopping is only creating more jobs.

The Associated Press contributed data to this report.

EXPLORE: ECONOMY, CHANGING WORKPLACE, WAREHOUSE
You read the headline right, there are more retail stores opening this year than there are stores closing. You may say, but when I walk down almost any shopping street, I see so many vacancies where there were previously tenants, so… how can there be more openings than closings?

A new report out by IHL Group answers the question. The kind of store that’s opening now is different.  If you look at the chart below, you’ll see that the most significant closings are due primarily to the Radio Shack bankruptcy and the closure of a lot of fashion stores. The fashion-related vacancies you’re seeing are dominating the list of store closures. You could blame technology for that, but that wouldn’t be entirely fair. It’s more fair to say that technology accelerated the decline of retailers who have not been in touch with what their consumers wanted as much as their competitors. Technology helps consumers see more of what’s available and that makes the comparison between brands so much more stark and apparent.

Here’s a chart listing the retailers that are opening more stores than any other.

Morgan StanleyVoice:Could Mexico Be Powered By The Sun?

One of the things you’ll see on the chart above is that the list of stores opening this year is dominated by discount and convenience stores. (You might not recognize some of the names. Couche-Tard is the corporate owner of Circle K stores, and Aldi and Lidl are large European grocery chains that are expanding in the US.)

The data highlight changing lifestyles and tastes. Fashion is less important in physical retail stores. It’s being shopped for more and more online and it’s becoming less of a focus for younger consumers who are more willing to spend money on experiences than on fashion products.

What’s the net difference in stores in total? The chart below tells the story (they are calling mass merchants what I call discounters like Dollar General and Dollar Tree). The discounters and convenience store openings are opening in a big way and the fashion retailers are closing almost as fast. 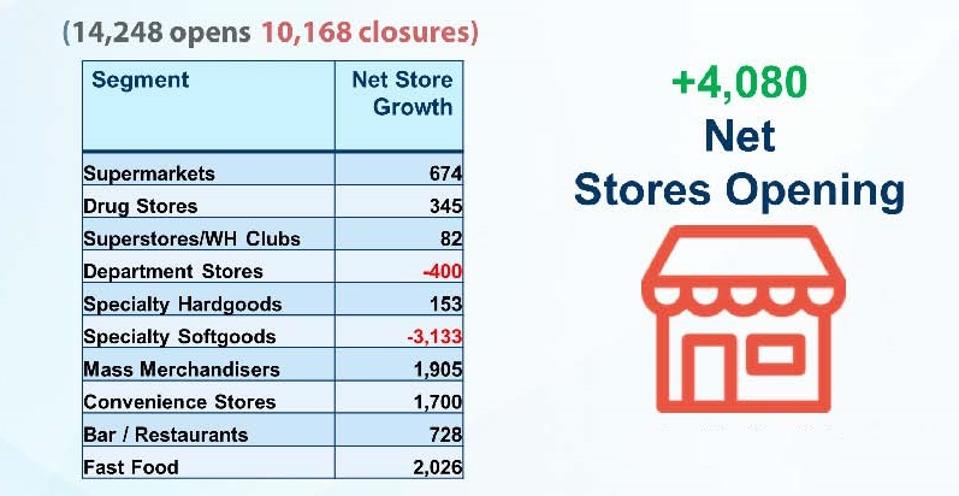 The reason why you see so many vacancies even though more stores are opening than closing is that the footprint and locations of the stores being closed aren’t suitable for the stores being opened. The old stores’ formats can’t be transformed and their locations don’t work for the new stores that are opening. Hence, more vacancies for you to see on major shopping streets. (Here’s an article I previously wrote about what will happen to the retail spaces that are vacant now.)

Of all the experiences that consumers are starting to prefer over purchases of things, food is always at the top of list. It’s one of the few things that applies to everyone so the market for restaurants is enormous. Ergo, any look at retail locations opening and closing should also be looking at what restaurant doors are opening and closing too. Here are the restaurant brands with the most store openings:

These are the restaurant brands that are having the most store closings:

At first glance, it’s hard to see trends in these store opening and closing numbers. For example, why is Starbucks closing stores and Dunkin Donuts is opening? Why is Pizza Hut closing stores and Noble Romans (also pizza) opening more stores than anyone else?

I had a conversation with my trend-seeing friend Irma Zandl about it. Zandl says “Dunkin Donuts, which is rebranding to just ‘Dunkin,’ has impressed me since Nigel Travis got on board as CEO in 2009. He really gets consumers. Their impending rebrand that drops the ‘Donuts’ name, suggests they realize how trendy donuts have become and they don’t want to be caught up in the donut backlash.” About Starbucks, Zandl says they are “at a tipping point. There are so many other, better, coffee places…hundreds of local places…” She adds, “as an aside, most of the people who still go to Starbucks are very corporate and Howard Schultz’s tirades against corporate America don’t help Starbucks’ cause.”

The big driver of these numbers according to Zandl is convenience. Noble Romans, the pizza brand opening more stores than any other restaurant business, is “all about expanding licensing and franchising into grocery and convenience stores… it’s all about the food and convenience these days, not so much groceries of cigarettes and definitely not the gas.”

Greg Buzek, President of IHL Group that wrote the report, says there are a few reasons for what looks like a disparity in the trends that the numbers reflect:

Those explanations are good and there’s more.  Burger King and McDonald’s are convenient, low-cost options whose store count is declining. That’s telling us that consumers want low price and convenience but they also want newness, they’re tired of many long-established brands. In addition, casual restaurant concepts are challenged by newer brands and fresher environments that give consumers the feeling they’re new and the next big thing. Hence the decline in store numbers for Applebee’s, Ruby Tuesday, Lone Star Steakhouseand others.

Consumers haven’t gone into hiding and they’re not spending less. They’re spending more and there are more new stores — but tastes have changed. One of the most important things about these changes is that they are happening faster than ever before. There’s lots of reasons for that and plenty to debate about it but there’s no way to avoid the constant adaptation that’s now required.  Organizations now need to be able to process new ideas at a rate that’s faster and more efficient than ever before. If you’re a legacy retailer of any kind, it’s hard to change quickly enough and that creates an opening for more nimble competitors. It’s not enough just to have something new, it has to keep evolving. That’s a challenge both for younger companies as well as the established players and it will be for the foreseeable future.